Master Arnt – a present from Paris

The Retable of the Passion from the Musée de Cluny: Still to be seen in Cologne until June 2021

While the coronavirus pandemic is likely to make travelling in Europe more difficult for a long time to come, the Musée de Cluny in Paris is giving the Museum Schnütgen a particular gift for more than half a year – the presence of the most precious of the international loans from the special exhibition “Arnt the sculptor of images. Master of animated sculptures”.

The Master Arnt exhibition ended on 20 September, 2020 and was seen by around 13,000 visitors. For all those who would have liked an extension of the almost three-month exhibition period, there is now a special surprise. A highlight of the exhibition from the Musée de Cluny, the retable of the Passion from the Parisian museum, has been permitted to stay in the permanent collection of the Museum Schnütgen for another 10 months. Here it meets other works by Master Arnt from the Museum’s collection, such as the relief with the Adoration of the Magi, which has been expanded by newly acquired fragments.

This exceptional extension of the loan is a clear expression of the friendly and trusting relationship that has linked the Musée de Cluny and the Museum Schnütgen for many years.

The small retable of the Passion from the Musée de Cluny in Paris offers some of the most expressive testimony to the art of Master Arnt, due to the outstanding quality of its workmanship and intact original polychromy. The scene of the Lamentation of Christ at the foot of Golgotha Hill is meticulously carved with nuanced rendering of the figures’ emotions. The paintings on the inside of the wings depict scenes from the Passion, the outside panels the Nativity of Jesus and the Adoration of the Magi. The retable is assumed to have once stood in the cell of a Carthusian monk for use in private devotions. It may once have belonged to the charterhouse of Our Lady of Bethlehem near Roermond, which was founded in 1387 and dissolved in 1783.

We thank for their generous support 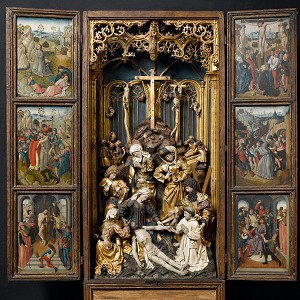