St. Cecilia and the other museum buildings

The Romanesque Church of St. Cecilia is the heart and architectural highlight of the Museum Schnütgen. With its harmonious spatial proportions, the atmospheric church invests the works exhibited within its walls with an extraordinary aesthetic presence.

The annexe designed by architects Schneider + Sendelbach, Braunschweig, is the first of an ensemble of three buildings in which the collection is presented. Since 2010, the glazed structure has connected the joint foyer of the Rautenstrauch-Joest-Museum and the Museum Schnütgen to the historic buildings of the Museum Schnütgen. The annexe also provides additional exhibition space for the collection, particularly the stone sculpture and stained glass exhibits. 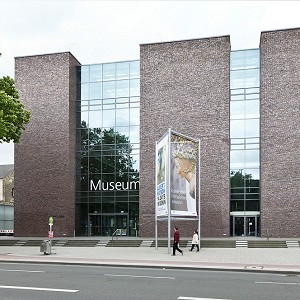 The Band building from the 1950s

What is known as the “Bandbau”, or Band building, adjoins the most recently constructed part of the building as an extension to the medieval church. Cologne architect Karl Band (1900-1995) designed the brick extension to the church of St. Cecilia for use as a foyer and library wing by the Schnütgen-Museum, newly reopened in 1956. Through his restoration of secular and sacred architecture as well as the construction of a series of new buildings, Karl Band became one of the most influential architects of the post-war modernist style in Cologne.

The Band building from the 1950s is protected as an historic monument. Today, the Museum Schnütgen primarily uses its spacious main room for the presentation of light-sensitive textiles. Directly adjoining the main room, the garden room is used for events and is open to visitors for use as a media and reading room. The Band building also provides access to the garden of St. Cecilia.

The Romanesque Church of St. Cecilia

St. Cecilia is both exhibition space and exhibit for the Museum Schnütgen. It is one of the twelve great Romanesque churches of Cologne. Its origins can be traced back to the 8th century, but today’s pier basilica with its three naves largely originated in the 12th century. The tympanum of St. Cecila from the portal of the northern side aisle, a major work of Rhenish Romanesque stone sculpture, also dates back to this period. A copy adorns the recessed space over the portal today, while the original is on exhibit in the museum.

Until 1475, St. Cecilia was the centre of a genteel home for eldery gentlewomen. It was then made into a convent church for the next 400 years. In addition, due to its proximity to the Schildergasse, it was the guild church of the painters of medieval Cologne. In the 15th century, the Gothic sacristy was built onto the side of the choir and a cruciform ribbed vault was built over the central aisle of the church. Today, together with its sister church, the Parish Church of St. Peter, St. Cecilia is part of Cologne’s only surviving double-church complex.

For at least 150 years after the turmoils of the French Revolution, the Church of St. Cecilia was part of the first public hospital of Cologne. At this time structural changes were made to the western part of the church.

The church and public hospital were largely destroyed during the Second World War. In the 1950s, Karl Band rebuilt the church building in the Romanesque style. St. Cecilia has remained a consecrated church, but this special place is first and foremost a museum. When the Schnütgen-Museum reopened after the war, Theodor Heuss called it “the most beautiful German museum.” It was the first museum in Cologne to be reopened after the war. 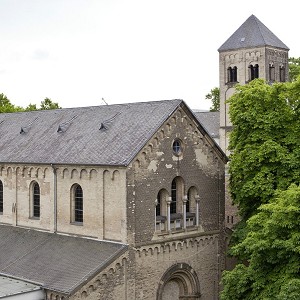 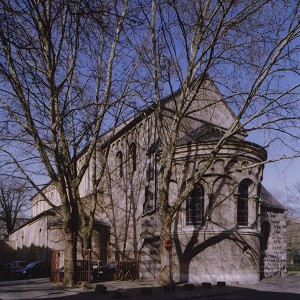