Horn of St. Cornelius from St. Severin on visit at the Museum Schnütgen

For two months, a special loan from Cologne’s collegiate church of St. Severin, the so-called Horn of St. Cornelius, will enrich the current special exhibition “Museum Schnütgen – In Focus. On the trail of reliquaries and saints”.

Its title can be traced back to the name Cornelius and the Latin word cornu (horn). As an attribute, it thus represents St. Cornelius, who was bishop of Rome and therefore pope in the mid-3rd century. After his relics were brought north over the Alps in the 9th century, his cult became especially popular in the Rhineland and in areas that today belong to the Netherlands and the Flemish part of Belgium. Its main centres included Kornelimünster near Aachen, where the head of the saint is enshrined.
The Horn of St. Cornelius from St. Severin is a reliquary made of buffalo horn. Originally, it was probably used in noble circles as a magnificent drinking vessel. This is supported by the escutcheons, silver gilt bands and gemstones, which were added as decorative elements either in the second half of the 14th century or later. It was only around 1500 that the vessel was transformed into the reliquary Horn of St. Cornelius. Since then, the horn has been used to store the mortal remains of various saints, including relics of the 11,000 virgins of St. Ursula. As is generally known, St. Ursula, who is one of the patron saints of the city of Cologne, suffered her martyrdom here on the Rhine River together with her companions. St. Cornelius was already one of the patron saints of the Church of St. Severin by the Middle Ages. It is thus likely that the horn was reworked into a reliquary for Cologne and specifically for St. Severin.

A new acquisition: further evidence that the cult of St. Cornelius was actively maintained in Cologne may be found in a vernacular prayer book from the late 15th century. The book highlights the most important local saints, including the Magi, St. Pantaleon and St. Severin, and also contains a miniature depicting St. Cornelius. The Museum Schnütgen was recently able to acquire this private devotional manuscript, and has now put it on display for the first time. It is exhibited alongside the little horn and in immediate proximity to the painting of the Magi from Braunfels Castle, which depicts one of the Magi presenting his gifts in a comparable horn vessel.

The generous loan of the Horn of St. Cornelius was only possible because St. Severin is currently closed for renovations. This vessel is still used for liturgical purposes, which is why a so-called “Hörnchensmesse” (Little Horn Mass) will also be held in Museum Schnütgen’s Church of St. Cecilia during the loan period. 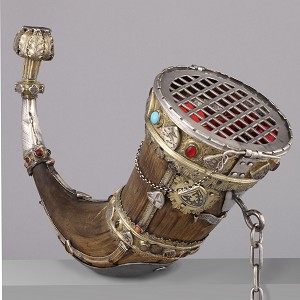 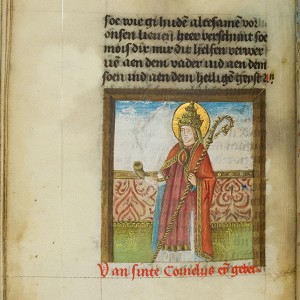